It began just as an idea to go to the theatre. We would book for No Wise Men at the Liverpool Playhouse, enjoy a bit of pre-festive light drama, and be home again ere the witching hour.
But that was before the snow. We left our south Liverpool house to go into town with none, and when we later emerged from the Playhouse it was four or five inches thick, covering everything in sight. The Christmas Market in Williamson Square took on a new and somehow more authentic look, and the pedestrian centre of town became almost a winter wonderland. Our little trip became a lovely double treat.

No Wise Men , from Peepolykus and directed by the Playhouse’s own Gemma Bodinetz, is a lot of fun. Like the snow outside the theatre, the play began slowly and only later did one realise how thickly layered it was; but as a night out this show is a must.

And so with the snow; it became part of the evening’s entertainment for everyone in town, as people of all sorts, disregarding the freezing temperature, stopped to gaze at the sparkling spectacle, and capture the sight for another day.

Church Street, like everywhere else in the pedestrian city centre, took on a new glow, enhancing the annual Christmas lights and banners, and somehow making for a calmer and happier atmosphere all round. 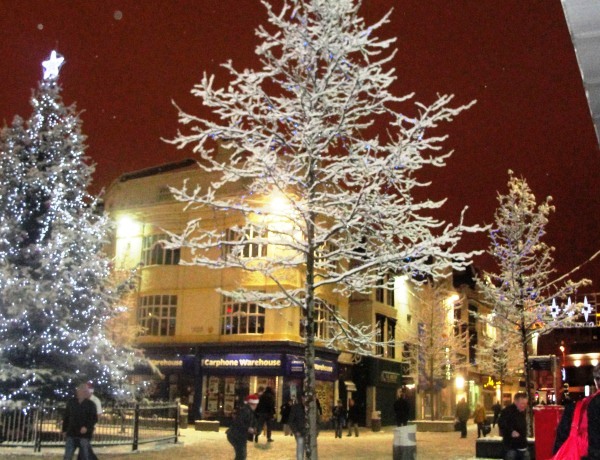 Making towards Bold Street as we returned to our car, we passed the big civic Christmas tree at the bottom of Parker Street, a natural meeting point for those out on the town, then reaching the old Lyceum building, where the post boxes (and even a parking meter) had taken on a Christmas card look all of their own. 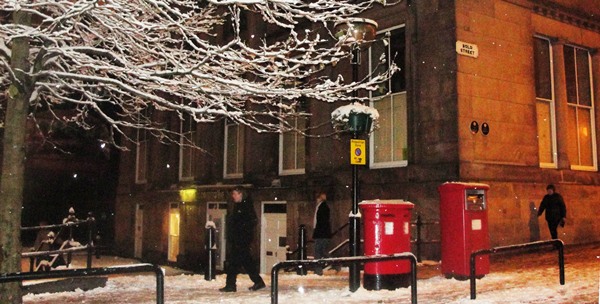 And so home to bed, our spirits lifted by the cheery dramas of the evening, both on stage and off it….