Can Meat Be Eco (Or Even Zero Carbon)? 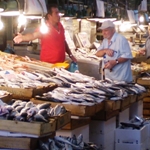 Recent advice is that, to ‘save’ the planet, we in the developed nations should eat meat at most four times a week; but we should also recognise the current fundamental economic centrality of meat in many parts of the developing world.
Discussion of these recommendations has produced some interesting ideas about what might constitute almost zero carbon food, even zero carbon meat. Hill grazing sheep, jellied eels and lobster aquaculture are amongst the food items and techniques proposed.

A recent Food Climate Research Network report says that we should reduce our meat consumption to four portions a week, to avoid ‘runaway climate change’.

By a coincidence, this topic came up when I was at a Defra (Department for the Environment, Food and Farming) Consumer Consultation in London last week, with other consumer people and Defra senior policy makers and stakeholders . Food and food security were debated in some depth, and amongst the topics we considered were future trends in the production and consumption of food.

Food security and self-sufficiency
How secure and / or self-sufficient is the UK, or indeed Europe, in the way this very basic commodity is used?

Actually, it transpires that the UK is about 60% self-sufficient in food (even though we are a small island with a lot of people, 70% of the UK’s land is still in agricultural use), and Europe as a whole almost completely food-secure, if it chooses so to be. It’s not just the self-sufficiency in food as such which counts, but also food supply security overall.

And this is where the discussion of the move towards vegetable-based food came in; generally, it uses much less carbon in the process of take-to-table. Nonetheless, this carbon equation cannot always be judged simply on the basis of e.g. ‘food miles’ alone.

Mostly-meat based local economies
As is frequently acknowledged, there are many places where moving to a vegetable-based food economy any time soon is not an option. Some of these economies are in Europe, and quite often they are very local, but meat is also basic for many much more challenged food economies in the developing world.

As examples, we might consider sheep grazing on rocky hillsides (to quote: “Forages constitute 75 to 90 percent of the total diet for sheep. Sheep are excellent converters of forage to meat and fiber”) or perhaps eels in estuaries (“Jellied Eels were once a staple food of the poor in the East End of London”).

Other functions of food animals
Not much else edible is likely to grow in these environments, and sometimes (aka the sheep) the animals also perform other functions, such as wool production, or keeping the balance of plant life in check…. which both in turn help rural tourism and other rural trading and local economic functions.

This is of course critical in some parts of the world where local economies (and local ecologies?) are particularly fragile.

The management of naturally occurring meat sources
Another example, which involves deliberate human agency, is an aspect of the newly-termed aquaculture. Work at the National Lobster Hatchery in Padstow, Cornwall has I gather shown that if baby lobsters are nurtured in a protected environment (i.e. with fewer predators) until they are a few centimeters long, they can have a survival rate about one thousand times greater than if their initial growth is totally ‘in the wild’.

Just think what a thousand-fold increase in good food could do for some communities in the developing countries… (and what more immediately it can do for fishing-based economies closer to home).

Transitioning to low meat economies
These few observations are clearly only the tip of a very big ‘carbon iceberg’.

There’s strong evidence that in general cutting back on meat (in the developed world anyway) is a move in the right direction for sustainable living and sustainable food supplies.

And there’s also the very real issue of how to make the global step-by-step transition – probably over decades and even longer – from meat economies, to those which are likely to be more realistically long-term food sustainable. Even in New Zealand you can’t just stop growing beef at a stroke….

[Later note: A colleague, responding to this agenda, has suggested that part of ‘food transitioning’ should be to link sustainable energy technologies with sustainable foods, e.g., marine wind turbines should also have a facility to grow edible mussels…. the scope no doubt becomes endless when we start to think about it.]

Food for thought
It’s not up to me to decide who eats what, and for which reasons; and ‘even’ vegetarians can’t assume that all they nibble is virtuously eco-good. And there’s nothing virtuous in those of us who are more blessed criticising a way of life elsewhere which requires meat-eating, if meat is the basis of an already desperately poor livelihood.

But if I were a meat eater – and especially if I were a younger meat-eater – I’d be thinking quite hard about all this.